Over half way there... 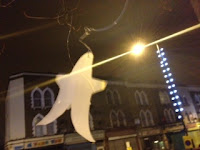 We were accompanied tonight by one of the crafty ladeez following an extremely pleasing evening making tin can lanterns (don't they look beautiful  - below). She looked a bit worried when R got the ladder out of the car and even more so when she tried to climb it to pull down one of the highest branches. Those two glasses of mulled wine weren't mixing well with either the height or the general shakiness of the ladder. R had to descend she was laughing so much! I also wonder whether all our creative juices had been used up tonight on the lanterns. This one looks remarkably similar to one a few nights ago. I think we need a bit of design inspiration for the next 12 stars.


Another neighbour stopped us tonight. He lives just next to the tree. 'It's great that you're doing this' he said. It may not be quite as adrenalin pumping as the spraying last year but it's certainly nice to have such lovely comments. 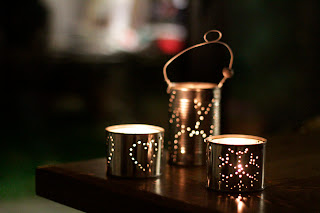