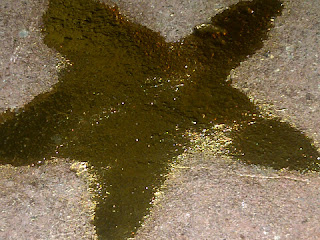 It's Christmas, but we're not ready. Not wrapped, not ready with the food. The house is also trashed, part in thanks to inviting a few people over for Christmas Eve drinks. Very nice it was too, but didn't really help our general sense of readiness for the rest of it. Poor Mr M has been asking us to wrap his presents and put them under the tree for, well ever since the tree went up actually. He seemed a bit disappointed when it got to tonight and he realised that, though he would find his wrapped presents under the tree in the morning, it will then be time to open them and too late to just sit and gaze, and feel, and guess. Is that what makes Advent so appealing? The practice of waiting. The anticipation almost better than the actuality. I know that delayed gratification is good, but surely we're onto dodgy theology here?

It's 1.30am and we've just met for our last starry night. Though R also has at least another hour of wrapping to do, she brought with her port and cheese to mark the occasion, which we enjoyed on top of one of the bins!  It was cold and late so there wasn't much deliberating before placing it near the Creperie, which will be open tomorrow. It won't be the only place open on Chatsworth Road on Christmas Day. Before I went out tonight we realised we didn't even have enough potatoes, let alone the cranberry sauce we've been meaning to buy these last few days. I was pretty sure I'd find somewhere selling potatoes, but good old Chats Supermarket had the seasonal sauce too. Not bad going for early in the wee hours of Christmas morning!

Before heading out to star-land N and I got the kids round the Christmas tree to light the candles. We sang a couple of carols (yes I know it's weird but he has Danish blood and those Scands have a thing about singing round the tree and having lit candles dangling from the branches) and then I read the story of the birth from The Book of God. The kids were a bit restless, to be honest, but I loved reading it again. Wangerin tells it so well. The account is so viseral. Messy, noisy, bloody, scary. But beautiful too. Like any birth of any baby. Only this one had a new star, risen in the East, to mark him out as Emmanuel. God with us.