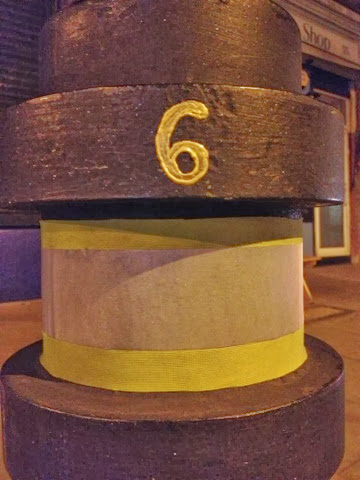 Ooops. Six was late. Only six days in and I forgot to do one. R was away and we had friends over so I was a bit distracted. Went out last night instead with 6 and 7 and one of them didn't even fit. So we're still trailing a day. But I have to say that I went down to the market today which was in full seasonal swing and they're so tricky to spot, unless you're about the height of a 5 year old, that I don't suppose there'll be an out cry.

6 is for all those cyclists (myself and many loved ones included) taking their lives in their own hands each time they cycle in London, and particularly those 6 who died in two weeks in November. Over a thousand brilliant cyclists staged a 'die-in' outside the Transport for London offices last week in protest. I wish I had gone with them. It's really time to improve the lot of the cyclist in London. I'm sure if they didn't feel as though they were cycling for their lives they would obey the road rules more regularly.