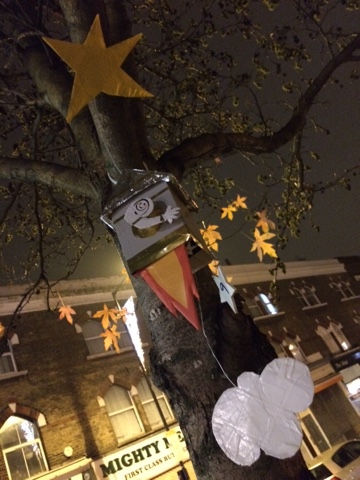 I saw the bird box flat, as a 2D home to a cartoon astronaut, off on an adventure.

This week it was announced that cosmic dust dating back to the birth of the solar system 360 billion years ago, had been found on rooftops in Paris, Oslo and Berlin. That unlikely juxtaposition appeals to me. The remains of something explosive, vast and distant, the fastest moving dust particles ever found on Earth (7 miles per second), stuck in the guttering of someone’s home.

2016 feels like a year Earth went into melt down. Brexit battles, Trump, bombs raining down on Aleppo, Mosul and Yemen, climate change. At home there was more welfare reform, NHS cuts, overpriced housing, low pay  and zero-hour contracts. You’ll have your own stories. There have been times when the big news stories have crowded in. It's got a bit much and we've switched off social media and 24 hours rolling news. It's felt hard to get any other perspective.

Finding a crisp winter night, filling a flask, running up that hill and glancing up. We’re in that impossible starry backdrop, with a glimpse of our bigger home. A vast alternative perspective for a city dweller, where at night the streetlights are always on.

I forget how massive our home really is.

Take the moon. At its closest our neighbour is 225,622 miles away. That's further than New Zealand!

Mars – which feels local and familiar – is 34 million miles away! At its closest point, light (travelling at 186,000 miles a second for goodness sakes) takes 12 minutes to reach us.

Then in the inky blackness, we have our International Space station. But in reality it’s only in the shallow end, a mere 250 miles above Earth. That's the commute from London to the Middlesbrough!

Whether from the back of Voyager 2, an astronaut peering out of a space ship, or looking up from a hilltop, we are small. We are tiny. Our astonishing home in this impossible universe is cosmic dust.

Some people looking out of the window, or up at the stars find the scale of it all a bit depressing. It’s not really. If anything the vastness may keep usgrounded and rooted in what matters. I’m loved. I don’t have long. I can prioritise – build a life around what really matters, and that which makes a real difference to others. That feels like finding home, which is maybe the greatest adventure!