One from Kari tonight ... 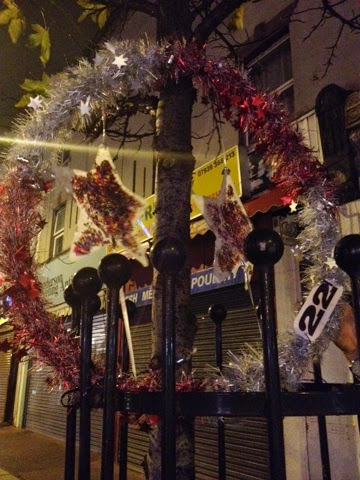 When I was thinking about what to do with my bike tyre, I was mostly going for pretty as opposed to particularly meaningful or symbolic. But it ended up becoming meaningful because of the materials that I used which led me to reflect on the expat experience.
The two stars in the middle are made of crayon shavings melted between two sheets of wax paper to create a stained glass window effect. Now, wax paper is something that you can find in any American supermarket next to the plastic wrap and aluminum foil (ahem... cling film and alumin*i*um foil). It's used in the same way that greaseproof paper is used here in the UK. But it's actually coated with wax, so when you put a cool iron to it, the wax melts and sticks. School children in the US are well versed in created laminated autumn leaves or crayon shaving stained glass by applying wax paper and an iron. (Well, the teachers mainly did the ironing bit.)
And this all got me thinking about celebrating holidays in a culture that you didn't grow up in, especially when the foods, materials, etc that are vital to your experience of the holidays are difficult or impossible to come by. The Christmas cookie (sorry, *biscuit*) that my mother made every year without fail contained "imitation brandy extract" as the key ingredient. I discovered this year that the little tiny bottle of brandy extract that I'd brought over with me more than seven years ago when I moved to London was well past its expiration date, and when I went to try to buy some more I discovered that this little but essential item - which is available in most large supermarkets in the US - was not stocked by Ocado. It may well be in Tesco or Sainsbury's but I don't shop in those. I ended up buying some "brandy essence" from a specialty baking supplier online. (Thank goodness for the internet - the expat's best friend.) Another Christmas biscuit that I made this year would have been very much improved if I had been able to get some "red hots" - little intensely cinnamon flavoured candies similar to Skittles but smaller. Something else that you can get at any US supermarket but simply don't exist in the UK.
Those are niggly little things. There are other customs and traditions that I've left on the other side of the Atlantic - some more common in the US and some unique to my family - that mean that Christmas in London will never be quite the same as Christmases in Iowa, Indiana or Michigan, the other places I've lived.
That said, I have very much enjoyed taking on many of the customs of my adopted country. I love mince pies and mulled wine and the fact that it's illegal to have a Christmas party in England without serving them. I love that Santa Claus is just as commonly called Father Christmas. And while I don't yet own a Christmas jumper, I love the fact that people wear them completely without irony here.
A couple of days ago, a British friend of mine who now lives in Tennessee wrote on Facebook, "I miss England at Christmas". I know what she means - both because I know what it's like to miss the celebrations in the place you've left behind. But also because England is pretty special at Christmas time.
Posted by hackneymac at 23:47