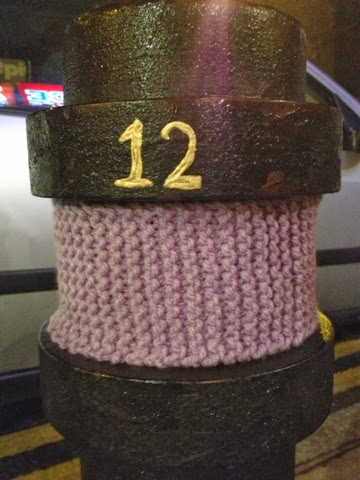 A warm and cosy kitted scarf for number 12. For the freezing fog from today which kept me on my toes as I cycled down the canal before the sun came up this morning. The Yarn Bomb Queen (aka Valerie) made it a while back and we've been hoping she might join us to fix it on a bollard one night. But R and I seem to be getting later and later and she is an early bird. She'll have to make another now to do later in Advent!

Tonight we were joined by the Lovely Kate. And by the guy who's been hovering around the corner shop. 'I like' he says. We laugh and make polite British excuses for ourselves. 'I have little English' he says. 'I'm from Kurdistan. I see one two bollards. These ones I like. The others no'. We get his drift and feel glad of the warmth of his tone. Nicer than the guy I passed near our doorstep on Monday night, when he pushed through the four of us (me and the kids) muttering under his breath 'Bloody white middle class people taking over Hackney'. Charming. I am not sure whether it's one of our local, vocal, patients from the mental health unit, or a disgruntled guy feeling his neighbourhood is filling up with people not like him, doing things he's not into, and pushing up the prices of houses, food and everything else, in their wake. But it didn't feel very friendly. Gimme those layabout, foreign immigrants scrounging off the state any day.