Thanks to Rob for kicking Advent off this year. Can you find it on Chatsworth Road? 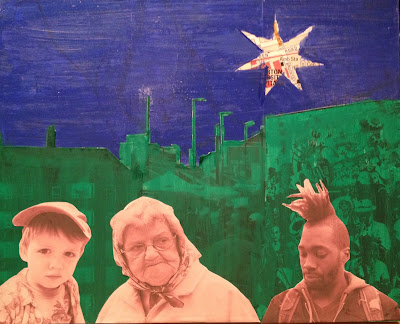 Here's what he says about it..

This piece finds its inspiration from the biblical story of three very wise men who went on a journey by reading the stars to find baby Jesus who was born in uncertain times. The Jewish population at the time found themselves living under occupation by the Roman Empire where the occupiers called the shots while those who were occupied had little or no say. With this reality the wise men found themselves in, there would be social, economical, political and religious implications as a result. The wise men searched for the baby Jesus with their hopes and dreams that another world is possible.

Reflecting on this story, I started to think about what if Jesus was born in Hackney as we find ourselves living in a rapidly changing borough. While the changes has brought some improvements where we live, not everyone is benefiting from it. Issues such as poverty is still a huge problem as over 40% of school children live in poverty even though we are no longer considered to be one of the most deprived boroughs in the country. Many folks are finding that they can no longer afford to eat, live and socialise in our area and they are feeling squeezed out in our own neighbourhood. As a result there are social, economical and political implications that comes with a rapidly changing neighbourhood. This sets the scene for this piece of art.

The piece shows three individuals of varying age and backgrounds journeying through Hackney by following a map with their hopes and dreams looking for the answer(s) to their questions that might trouble them.


The sky is a map painted blue with an area shaped as a star unpainted (alluding to how often times maps have stars on them to signify a place). Painted green, the scenes are from Hackney, representing ordinary people and every day life (as opposed to institutional buildings such as the Hackney Town Hall) such as the Pembury Estate, Ridley Road Market and the Hackney Peace Mural in Dalston. The three people at the bottom were left untreated to bring them into focus, especially their body language. Looking at these three figures, we are invited to reflect on what their hopes and dreams might be and what the answer to their question(s) might be.