You ought not to be doing that... 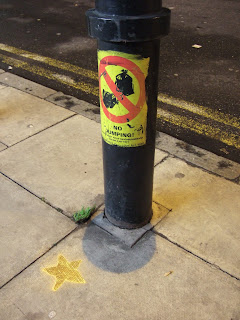 We got told off tonight. I've been wondering if I could call him a Hackney Ranter, but he was quite reasonable really. Sort of reasonably pointing out that we were defacing the pavement and that we were old enough to know better. When we told him that it would wash off in a couple of days' time he wasn't really satisfied and added that he was teaching his children to have respect for other people's property and that if we were not respectable (I read 'white' in there, though he did not say it) the police would have probably already arrested us. I expect that the fact that we were painting it by the no dumping sign didn't really help. But, you know, he sort of had a point. Just because no one has accosted us before tonight, and just because the Turkish guys outside their shop were quite cool about us spraying it in front of them, doesn't really mean that it's not just plain, old fashioned, illegal graffiti. (Do you know, I am not even that sure of the legal position. Is it illegal? Could we actually be arrested if a copper came along at the right time? I find it hard to believe that Hackney police officers - are there any collective nouns which aren't derogatory? - would even bat an eyelid. More important fish to fry I would imagine. But do petty theives think that too?) And I wondered, whether our whiteness, our age, our sex had prevented others, who have witnessed these spraying moments, from saying anything. If I had seen a couple of young boys with their spray cans out on Chatsworth Road I may well have accosted them myself. But a couple of 'respectable' looking women of a certain age? I probably wouldn't bother. So, maybe it's good to know that the community has got a conscience after all. Even in lone voices. Poor R... 'I didn't recognise him. He's not a parent at the school anyway.' Yikes! I hadn't thought that she might have quite a lot more at stake than me. Maybe she'll come tomorrow in disguise?!

Before we went out tonight I thought I might rather miss this nightly ritual. I think now I feel it'll be good to take a break from it!