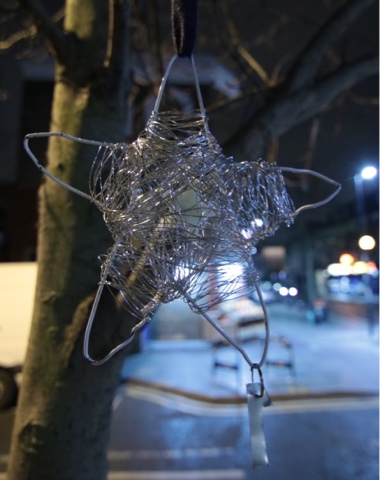 This year has been a blur, I'm still stood wondering where the summer went, and yet the countdown to Christmas has well and truly begun.

Making this star was a moment to stop and reflect, and a moment to look forward. What struck me most was the simplicity and the universality of the symbol. From the star above a stable, to the Islamic star and crescent, to the Jewish Star of David. This symbol has been claimed for many flags and many faiths, often as a symbol of hope and light. But oh, how twisted it can become when faith and borders harden and stars burn bright with human pride and power.

My metal coat-hanger star was made on a day when the President of one starry flagged nation retweeted anti-Muslim bile, and in the real world, thousands of Muslims continued to flee persecution in Myanmar, a nation whose single starred flag is only 7 years old.

Inside my star is a smaller star, it’s one of those glow in the dark stars. I guess I put it there as a simple prayer, a hope for persecuted people everywhere. It’s a light that calls out to leaders who have hardened their borders and hearts, a star that is longing for some kind of miracle this Christmas.
Posted by AdventAdventurers at 19:08